Blackman standout Landon Fowler has put a lot of blood, sweat and tears into his wrestling career and last night, all the years of preparation and hard work paid off.  Fowler put an exclamation mark on his junior season with a solid 12-5 decision over senior Max Grayson from Bearden.  The win cemented Fowler as the 7th state champion for Blackman High School.

After finishing as the runner-up last season, Fowler spent this year noticeably focused and incredibly determined to make sure that no one could stop him on his state championship hunt.  He didn’t hope to win the state title this season…he planned on it.

Fowler took advantage of every opportunity in the off-season to out-work his competition and get stronger.  Fowler knows what every state champion wrestler knows.  The sacrifice and hard-work pays off.

On his way to the finals, Fowler had to beat some tough competitors who were happy to stand in his way.  Wilson Central has an up and coming freshman in Parker Bennett who Fowler defeated in the quarter-finals.  Sawyer Knott from Summit is an excellent wrestler and his semi-final match with Fowler was very close.  The only take-down in the match came from Fowler late in the first period and it was that takedown that secured the match for Landon.

Grayson from Bearden is formidable as well.  He was the runner-up last year and only had two losses this season.  One of those losses was to Fowler. 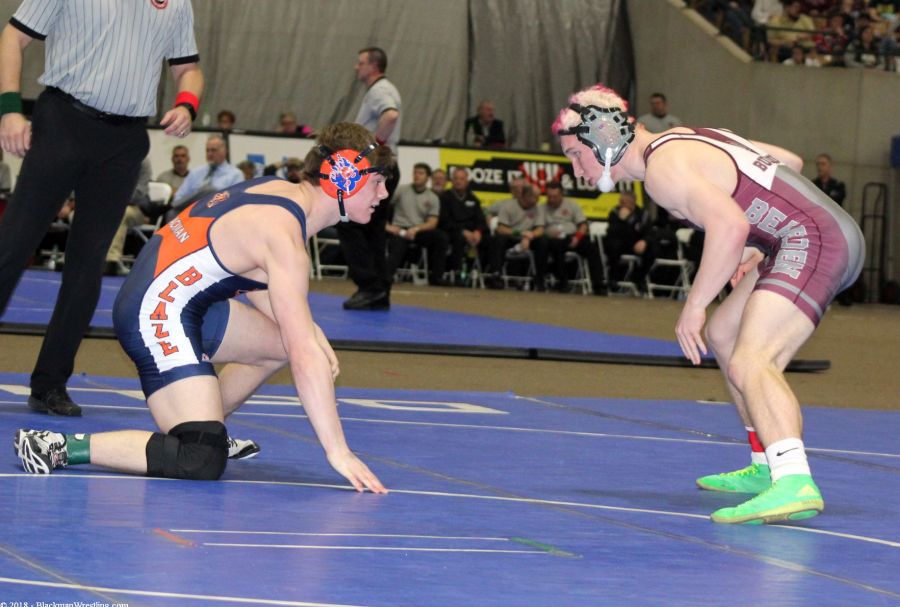 In the first period of the finals match, Fowler hit a slick slide-by and jumped out to a quick 2-0 lead.  Grayson responded with a literal last second escape to end the first period 2-1.  Fowler chose down to start the second period and got a quick escape to go up 3-1.  Fowler got in on a shot and eventually got a take-down but couldn’t hold on to the position and was reversed.  5-3.   Fowler wasn’t having it and in the same action, he reversed Grayson and put him to his back earning two near fall points.  9-3.

At the state of the third, Grayson chose down and was able to score a reversal.   Landon escaped to make the score 10-5.  From there, Grayson did his best to score a take-down but Landon’s defense was too sharp.  With 8 seconds left in the match, Grayson hit a desperation head-throw attempt which Landon countered giving him the final take-down and a 12-5 win!

The Blackman faithful and many friends and family erupted from the stands!!  Nothing beats standing on top of the podium and Fowler can finally rest knowing that he is the best that the State of Tennessee has to offer!!

It has been an incredible season and it is the 4th season in a row that Blackman has had a state champion!  With his senior campaign ahead, Fowler’s work ethic and drive make the odds for another Blackman state title next year pretty good!

Congrats to Fowler and Go Blaze!

For photos from the TSSAA State Tournament, please visit out PHOTOS page!!!

Anyone who would like a higher resolution image of one of these shots, please send an email to blackmanwrestling@gmail.com and we will be happy to send.