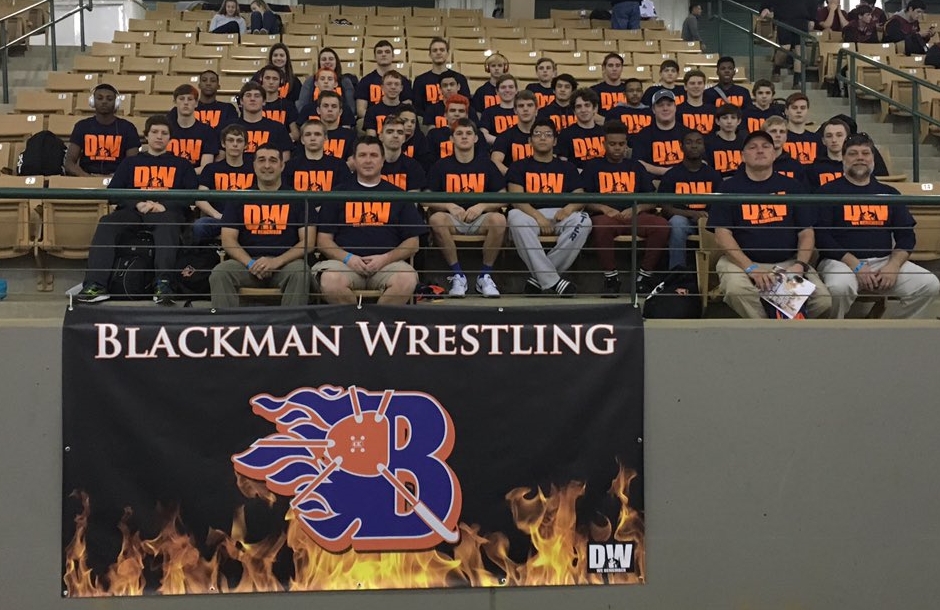 There are a total of 178 wrestling high schools in Tennessee.    Blackman was one of only sixteen class AAA high schools who qualified to compete at the 2016 TN State Duals this weekend at the Williamson County Ag Center in Franklin, TN.  Before we get to results, think about that for a second.  In AAA, there are 92 AAA schools who offer wrestling, so making it to state duals means that your team did something that 76 other AAA schools did not.  That’s a lot of people sitting home wishing they were in Franklin competing!

This was Blackman’s 7th trip to the state duals in the past nine years and as many of our young wrestlers found out, getting wins at the state tournament is a tall order.  For several of our athletes, this was their first time getting on the floor at the Ag Center and for some, the absolute largest stage they have ever competed on.  Competing at a large venue in a high stress situation can sometimes cause a condition affectionately known to wrestling enthusiasts as “Bug Eyes”.    When your eyes widen due to shock, awe or fear, you have Bug Eyes.  It is curable in wrestlers, but only through lots of competition and experience.  🙂

Blackman squared up with Science Hill in the first dual on Friday afternoon and quickly the Hilltoppers showed that they meant business.  The dual started at 106 pounds and Science Hill quickly got out front with a second period pinfall victory over Blackman’s Liam Elam.  The Hilltoppers reeled off three more in a row with a pin over Lukens at 113, and minor decisions over Trevon Thomas (120) and Clayton Apland (126).  Score after four matches,  Blackman 0 – Science Hill 18

Blackman’s Jalen Brown (132) finally put the Blaze on the scoreboard with a thrilling 6-2 overtime victory over Pridemore.  The match was tied 2-2 at the end of regulation and both wrestlers were put on their feet for the one minute sudden victory period.  Neither wrestler got a takedown so they had to go to the two, 30 second tie breaker periods.  It was here where Brown scored enough nearfall points to put the match away!  Blackman 3 – Science Hill 18

Science Hill didn’t allow Blackman to go on a run however.  Blackman’s Elijah Cox had a brawl with Diehl but ended up getting pinned at 5:07 in the third.  At 145, freshman Landon Fowler looked sharp as he pinned his opponent Morrell in the first period.  The back and forth continued however as Tracer Spurlock gave up a pin at 152 and in the following match at 160, Matthew Sells pinned his opponent in 29 seconds.  Score after 9 matches,  Blackman 15 – Science Hill 30.

Down 15 with 5 matches to go is not unthinkable but Science Hill wasn’t done.  At 170, Vincent Cross lost a very tough contest with Medina 4-3 to put the Hill up 15-33.  Hunter Winters (182) and senior Andre Bravo (195) put the Blaze in position to make a comeback as they both picked up pins to close the gap to 27-33 with two matches to go.  At 220, Science Hill’s Hunter Bagley (ranked #2) put the match out of reach with a first period pin over Blackman’s Sam Luker.  The Hilltoppers forfeited 285 and the final score was Blackman 33 – Science Hill 39.

A close loss like that is especially tough on a team and a coach.  One match goes differently and you have a victory.  Change one fall against us to a decision or change one decision to a fall and you have a tie.  It’s a perfect example of how the little things add up.

So, Blackman regrouped and returned Saturday ready for battle in the consolation rounds.  As we all know, high school sports teaches life lessons and one of our guys learned a big one by missing weight and disqualifying himself from competition.  It’s heartbreaking for everyone when something like that happens but it’s a part of life.

Blackman faced Heritage at 9am on Saturday morning and looked a little more determined and intense than they did on Friday.  The dual started at 220 and Blackman found itself again quickly in a hole.  Heritage is a tough team and they pinned us at 220, 285, and 106 and did so all in the first period.  Cole Lukens (113) was the bright spot of the first 6 matches scoring the Blaze a pin over Heritage wrestler Jaylen Tyler.  After his match, Blackman lost 120 and 126 both by pin and again, both in the first period.  Score after 6 matches, Blackman 6 – Heritage 30.

Jalen Brown(132) scored a decision in his bout but Heritage extended their lead further with a pin over Cox at 138 a major over Fowler at 145.  At this point, the match score was Blackman 9 –Heritage 40.

Heritage could have forfeited the remaining 5 matches and still won but they decided to wrestle and get experience.  Blackman won the final 5 bouts with a decision by Tracer Spurlock (152), and three pins from Cross, Winters and Bravo.  (Sells received a forfeit).

So obviously not the result anyone had hoped for, but as I mentioned earlier, the experience is invaluable.  When you lose close matches like this, you hope that your young guys understand the importance of bonus points and how their efforts in the practice room and on the mat contribute to the performance of the team.  It’s not always this simple but looking at the final scores, all it took was one match to be different and we win both duals.   Coulda, Shoulda, Woulda  Check out pics HERE.

The Blaze ended up 23-6 on the season and Region 5 Champions!  This is a VERY respectable record!!  It’s been a great season and we have much to look forward to!

NEXT UP – Blackman will send 14 wrestlers to the Region 5 individual tournament Feb 12-13 at Cookeville High School.  The top four in each weight class will qualify for individual state and again return to the Ag Center for the state tournament on Feb 18-20.