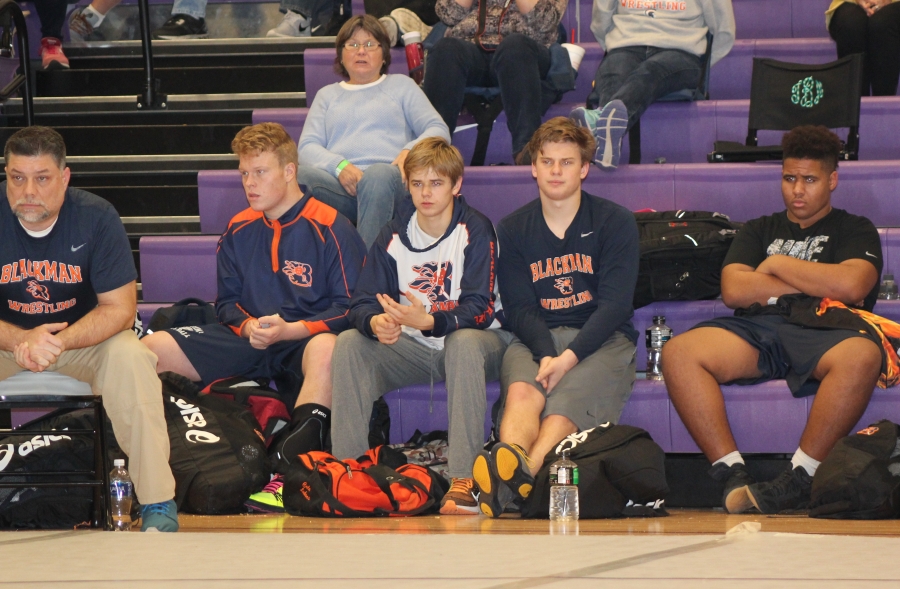 The Blackman Blaze posted a 5th place finish at the Christian Brothers Duals this weekend in Memphis, TN.  There were a dozen teams entered in the tournament from all over Tennessee and a couple from Arkansas.  Blackman was among three other Middle Tennessee area teams including Clarksville, Lawrence County, and Summit.

The coaches and staff at Christian Brothers were very accommodating and the tournament itself was top notch.  Our wrestlers arrived on Friday evening and held a practice in the beautiful new Christian Brothers wrestling facility.  After checking weight, the team headed out to Chik-Fil-A, grabbed some dinner and hurried to the hotel.

Saturday morning, Blackman weighed in and our first matches were set.  The 12 teams were split into 3 pools. 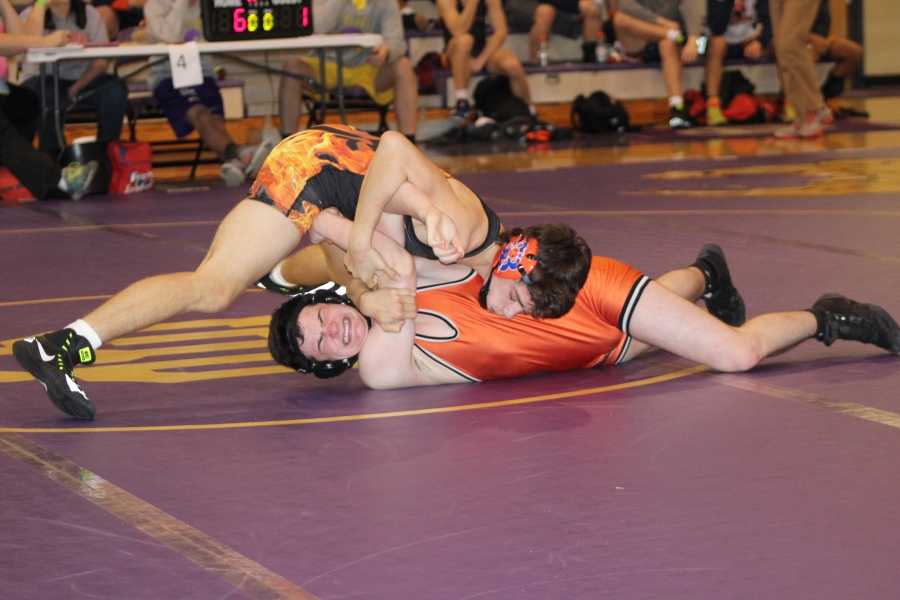 Blackman’s first match was against Pigeon Forge.  The Pigeon Forge squad is a well-coached group and they’re historically a Division A-AA powerhouse who are a fixture in the finals of the state dual tournament.  The match began at 145 with Jalen Brown dishing out a 17-1 tech fall to Pigeon Forge’s Andrew Baiamonte.  Landon Fowler, Matthew Sells and Ryan Heath followed up Brown’s efforts with three pins to stretch the Blackman lead to 23-0.  Pigeon Forge wasn’t about to lay down and they reeled off wins in the next three weight classes with a pin over Spencer Layne (182), a Forfeit at 195, and a pin over Dylan Heath at 220.  Team score at this point was Blackman 23 – Pigeon Forge 18.  At 285, Jamil Hughes pinned Jared Watson to advance the Blackman lead to 29-18.  Blackman traded wins for the next few weight classes earning victories from Wiley Van Voorst(113), Daniel Bradford(126) and Brooks Sacharczyk(138). Final Score Blackman 47 – Pigeon Forge 36 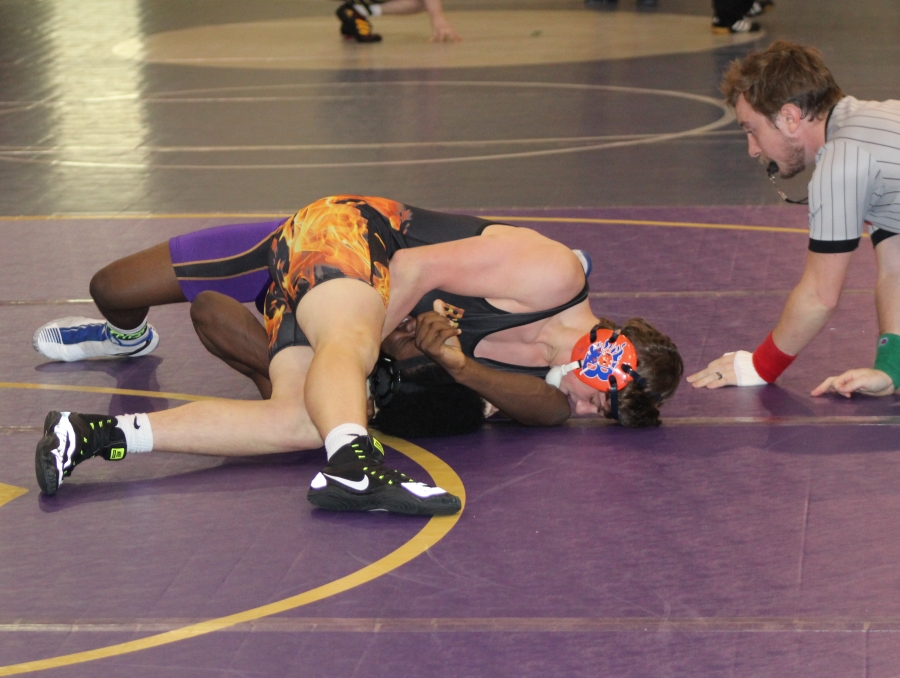 Blackman faced Clarksville in the next dual and after examining the lineup, it was obvious that there were several varsity guys who didnt attend.  Clarksville was forfeiting 106, 113, 120, and 160 so from the get go, the Blaze had a 24 point advantage from the start.  The dual started at 152 and it was all Blackman.  Landon Fowler, Ryan Heath, Spencer Layne, Dylan Heath, Jamil Hughes, Daniel Bradford, Brooks Sacharczyk, and Jalen Brown all secured pins for the Blaze.   FINAL SCORE – Blackman 70 – Clarksville 12. 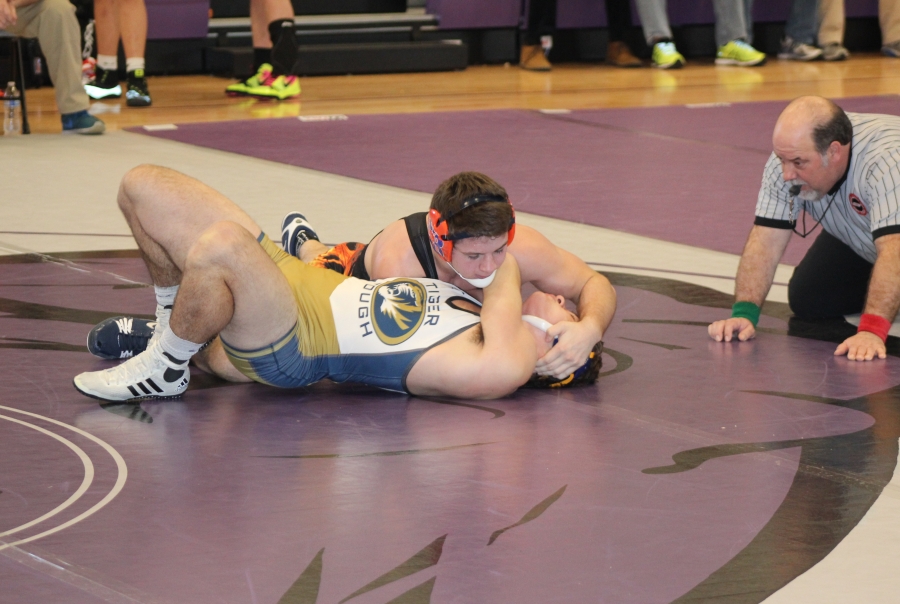 The next match with Arlington was going to be more of a challenge.  Arlington’s team has been ranked highly in Tennessee this season and after recently winning the GP West tournament in Nashville, they had the attention of the Blaze coaches.  The dual started at 160 pounds with Senior Matthew Sells taking on Josh Worley.  Sells had Worley on his back a number of times but couldn’t get the call on the pin.  He had to settle for a tech fall and 5 points instead.  Ryan Heath followed up Sells’ effort with a pin over Antcliffe at 170.  Blackman forfeited at 182 and after that, Arlington got the ball rolling.  At 195, Spencer Layne was pinned and Arlington took the lead 12-11.  At 220, Dylan Heath lost a close match 4-1 and the Tigers didn’t stop there.  Jamil Hughes was pinned at 285 and the team score moved to Arlington 21 – Blackman 11.  Evan Smart received a forfeit at 106 to close some of the gap 21-17 but Arlington would win the next two weight classes (113 & 120) by pin to stretch their lead to 33-17.  Daniel Bradford worked to reverse the momentum and he scored a pin over Ethridge at 126.  At 132, Cole Lukens gave a great effort but lost by pin to Kerns.  Blackman freshman Brooks Sacharczyk wrestled a solid match and ended up losing a 6-1 decision at 138 and the team score at that point was Arlington 41 – Blackman 23.  At 145, Jalen Brown earned a 12-7 decision and Landon Fowler posted at 7-0 decision at 152 but the match was already too far out of reach.  Final score – Arlington 41 – Blackman 29 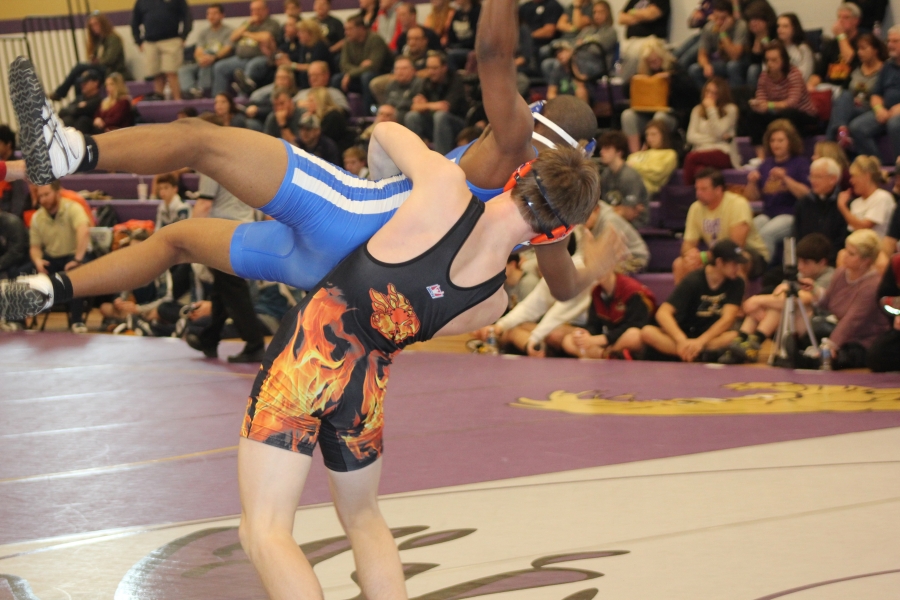 The loss to Arlington placed Blackman 2nd in pool B so that set us up to have placement matches with Bartlett and Summit who also placed 2nd in their respective pools.  After licking their wounds a bit, the boys had to strap up and deal with a very hungry Bartlett team.  The dual started off at 170 with Ryan Heath pinning McDonald early in the 1st period.  At 182, Spencer Layne pinned Longo in the 1st period as well and it seemed that Blackman was well on its way.  We gave a forfeit at 195 to give Bartlett their first points.  Dylan Heath started strong against Cara at 220 and after getting the 1st takedown, Cara reversed him and managed to get a pin.  Score Blackman 12 – Bartlett 12.  At 285, Jamil Hughes pinned Oliver.  The Bartlett lightweights were a tough bunch and they put a tech fall on Evan Smart, a pin on Wiley Van Voorst and pin on Liam Elam.  Daniel Bradford stopped the bleeding at 126 with a pin over Cody Longo and at this point, the dual score was Blackman 24 – Bartlett 29.  Cole Lukens was pinned by Vatter at 132 and Brooks managed a minor decision over Huffstetler at 138.  Team score 27-35 Bartlett. At 145, Dalton Cockman from Bartlett gave Jalen Brown all he could handle and posted a 14-1 major decision to push the team score to 27-39 Bartlett.  With two matches left to go, Blackman had to have two pins to tie the score.  At 152, Landon Fowler had his hands full with Sidney Smith.  Although Landon was clearly the superior wrestler, Smith was not interested in being pinned.  Landon really had to work on wearing him out before he was finally able to secure the fall in the 3rd period.  Score – Blackman 33 – Bartlett 39.  Matthew Sells was the final match at 160 and he wasted no time securing the fall to tie the score 39-39.  When the dual is ties, the refs go to criteria and Blackman won the criteria having one more 6 point victory than Bartlett.  Close call! 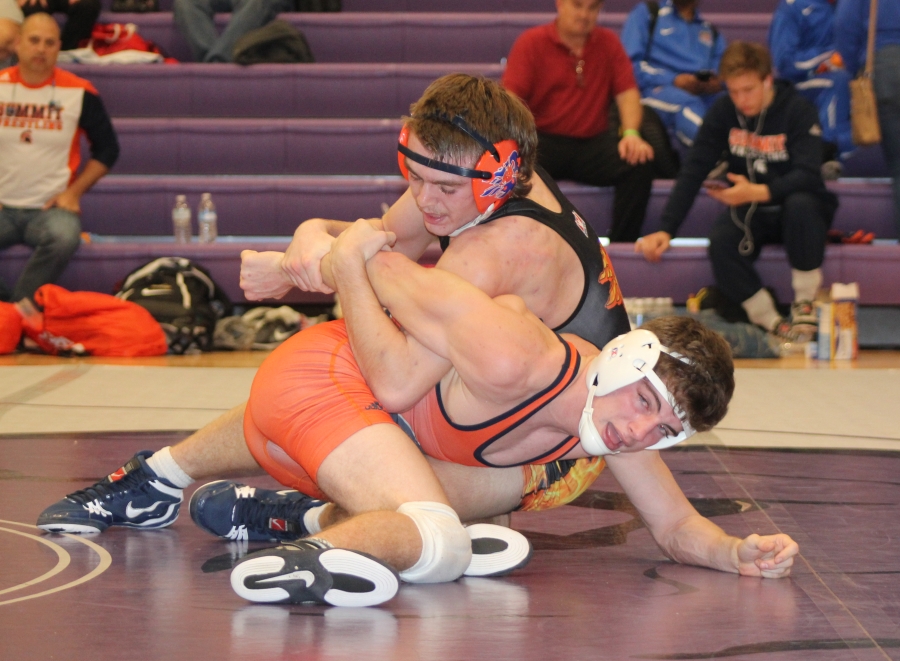 The final dual with Summit was for 4th place.  Both teams were excited and the atmosphere of the dual certainly showed that!!!  Spencer Layne started things off at 195 with a perfectly executed pin over Choate.  Next, Dylan Heath received a forfeit at 220, and Jamil Hughes pinned Moody at heavyweight.  Just like that, Blackman was ahead 18-0.  Summit’s lightweights didn’t care to see a rout and they took care of business posting pins at 106, 113, and 120 over Smart, VanVoorst and Elam.  Team score tied 18-18.  At 126, Daniel Bradford earned a decision over Klingensmith.  21-18 Blaze.  At 132, Cole Lukens earned a much needed victory over Grady in a 12-5 decision.  Brooks lost the next bout by major decision to Nathan Porter.  With only 5 matches to go, the team score was Blackman 24 – Summit 22.  Jalen Brown wrestled a very tough Sean Butler at 145 and earned a victory by decision.  At 152, Gabe Gomez stepped into the lineup to face Steven Tierney.  Gabe was wrestling a great match but late in the third period, he was forced to his back and pinned before the referee noticed that he was injured.  Score Blackman 27 – Summit 28.  At 160, Landon Fowler bumped up to wrestle Kobey Desselle.  Landon was up to the challenge and he earned a victory over Desselle who was determined to not get pinned.  Matthew Sells followed up Fowler’s effort with a 5-1 decision over Summit’s 170 pound workhorse Sawyer Knott.  With one match to go, Blackman had the lead 33-28.  In the final bout, Ryan Heath fought off a relentless stream of attacks from Summit’s Zack Carney.  Carney is accomplished and was determined to put Ryan on his back.  He finally succeeded in the 3rd period to propel the Spartans to the win.  34-33.

At the end of the day, Blackman ended up 3-2 against some very tough competition.  It was a great opportunity for our coaching staff to get a feel for where we as a team as we prepare for our region dual tournament this Thursday night.  Blackman is expected to compete this year at the TSSAA State Dual meet so this experience was very valuable and should help all of our wrestlers get ready for bigger and better things!

Pictures from the duals can be found on our PHOTOS page.

Blackman is back in action on Senior Night this Tuesday night vs Siegel and Coffee County.  Please come support the Blaze!!